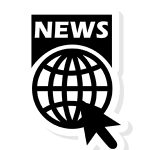 This is a new feature where I provide a link to an especially interesting article that I have read. The articles will change although not with any regularity – just when I see something new that I want to share.  You may also notice that most of my picks come from the excellent online astronomy/nature newsletter, EarthSky, which I highly recommend for those wanting to keep abreast of space and nature news.

For decades, astronomical theorists have told us that a black hole’s powerful gravity would warp the space around it. This new visualization from NASA’s Goddard Space Flight Center is the best yet at showing exactly how. Posted by EarthSky/Space on September 27, 2019.

Astronomers think the object they’ve labeled C/2019 Q4 – discovered August 30 – came from a place far, far away – outside our solar system. If confirmed, it’s only the 2nd interstellar object ever detected, after ‘Oumuamua in 2017.  Posted by EarthSky September 12, 2019.

Will the Webb telescope be able to detect life signs at nearby exoplanets?

The Webb Telescope is Hubble’s successor, due to launch in 2021. A new study says it’ll be powerful enough to search for life signatures in the atmospheres of the 7 Earth-sized planets in the TRAPPIST-1 system, just 39 light-years away. Posted by EarthSky September 2, 2019.

No, it’s not pseudoscience. Does a regular alignment of planets make a strong-enough tug to regulate the sun’s 11- and 22-year cycles? Read more in this story via Eos – a source for news and perspectives about Earth and space science – from the American Geophysical Union.

This article concerns our rapidly shifting magnetic north pole. The article was posted by EarthSky Voices on May 22, 2019.

This article concerns the launch of the new SpaceX 60 Starlink satellites into orbit on Thursday, May 23, 2019.  Reported in EarthSky on May 25, 2019.  Includes photos and a very cool video of the “train.”